Just like you, I have suffered severely from the pain and agony of migraines and the sorrowful repercussions they create in a person's life.

Like many young people who suffer from migraines, I first started to get migraine headaches around the age of ten. The photo to the right was taken by my father while I was suffering from a headache.

My name is Eileen Walsh-Henry and this is the true story of a life filled with the anguish of migraines—that is, until the truth about migraines was discovered.

It is also the story of my husband's work as a migraine researcher, the discovery of the genetic cause of migraines, identification of the biological methodology to control them, and the resulting formula for migraines that later became Tuliv Migraine Defense.

My mother and grandmother both had migraines, so they knew what was happening to me but could offer little help other than a wet wash cloth and a dark room.

During my teen years the migraines came regularly with each period. In my twenties, the only extended relief from migraines was when I was pregnant. But as soon as I delivered each of my three children, the migraines returned. Caring for children while holding your head in pain is not the way a person should have to live, but I did.

Around the age of 40, my migraines began to worsen and within three years they had become a hellish daily nightmare of pain. Migraines were controlling every part of my life. It was not unusual for me to step over the line of safety and use two injections of Imitrex day after day in order to work eight hours and return home.

I no longer had any hope of returning to a better way of life, and I began to feel that only death would bring an end to my misery.

Perhaps it was the strength and support of my husband Lyle, who consistently helped me each morning as another migraine attack came regularly at 4 AM, that kept me going.

Following another bad experience at a well-known migraine clinic, Lyle made the decision to dedicate his time to the study of migraines. When he told me that, I knew he would not let it rest until he accomplished his goal. He had an international reputation for accomplishing tasks that took the mind of a genius, and he had provided solutions to several leading pharmaceutical companies in the U.S. and Europe.

As for myself, I had nearly twenty years of experience working in the medical field as a nurse specializing in migraine care. My knowledge of migraines generally surpassed that of the doctors who had been prescribing various migraine medications for me.

In 2003, after years of study, Lyle believed that an inherited gene in a DNA is what makes one susceptible to migraines. He published the idea that the expected gene would be found in the mitochondria of specific cells that had receptors for the hormones secreted by the pituitary gland. Universities later confirmed his belief when they announced that they had discovered the existence of a migraine gene in the exact type of cell that Lyle had predicted it would be found.

Accepting Lyle's ideas about how the problem of migraines could be solved, my MS Ophthaneurologist introduced us to one of his former research partners, Dr. Coleman, a neuroendocrinologist from Harvard Medical School. At the time Dr. Coleman was studying the effects of nutraceuticals on neurological diseases. Although migraines are not neurological diseases, their meeting provided Lyle with direction and guidance in the use of nutraceuticals in developing an all-natural migraine formula.

Under the supervision of Lyle and Dr. Coleman, I started taking “the formula” in early February of 2004.

Within weeks my chronic daily headaches began to fade. First I noticed they were less severe and they would stop much more easily with even a lesser amount of Imitrex. Then I went from having a migraine everyday to having migraine-free days in between. After a short time I noticed that my calendar was filling with more and more migraine-free days and, finally, no more migraines. Since the day they stopped in February 2004, I have never had another migraine. Not one. Not ever again.

I remain migraine-free today by taking Migraine Defense daily. I know it is working because during the few times that I have forgotten to take it, those early warning signs of a migraine have happened, although they never formed into a headache.

When patients and workers at my clinic noticed the changes in me, they asked to try this new formula. By tracking their progress during a trial period, we knew Lyle had developed a migraine formula that could work for all people who suffered from migraines.

Lyle and I work to help others become migraine-free. It was never our intention to develop anything to sell, but once we knew it could work for others, we wanted to do whatever we could to help migraine sufferers, like you, enjoy a migraine-free life. 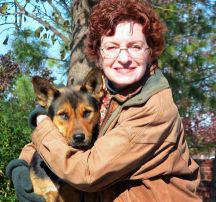 I chose this picture of me with one of our five pets, because I am outside on a bright sunny day enjoying life without the fear of getting a migraine. This is something that a few years ago I thought I would never be able to do again in my lifetime. It is so great to live a migraine-free life. Will you join me?

You can personally visit with me by calling 1-866-367-5953 to talk about your migraines. If I am unavailable at the time of your call, please leave a message and I will return your call.

If you prefer email, just send it to Eileen@Tuliv.net, or contact us online. Please tell me a little about your migraine history and ask any questions you may have about migraines.

My very best to all of you,

Your natural path to experiencing a migraine-free life is waiting for you.

Get Answers to Your Questions